I want to do a series on traditionally prepared, nutritious foods.  We have started this journey, as many of you know, in an effort to heal our son’s reflux and gut issues.  Below is a little background on what happened with my now 7 year old (though leaving out a lot of details, not to mention the cost comparison of medicines and formulas vs homemade).

Obviously, I am in no way a medical professional and am NOT giving you medical or health care advice.  I am offering you information and what you do with it is up to you.

Mister had terrible reflux, was on Nutramigen baby formula (it is an elemental formula in which the dairy is broken down as much as possible) for dairy protein allergy, and overall his gut was a mess.  I nursed and pumped as long a I could (while doing a dairy free diet myself, for his sake) but Mister refused to nurse after 6 months; I continued to pump but after a month lost my supply.

If you have read anything about traditional foods, or traditional nutrition, you have read that the “gut” is the most vital part of the body- it produces enzymes that affect every single aspect of your body functioning properly, along with so much more we have learned in the last 10 years.

From using hormones to absorbing vitamins and minerals, the condition of your gut determines your overall health.  Period.  (see the bottom of this article for links and resources regarding gut health)

So, here are a list of the ingredients in a can of Nutramigen: 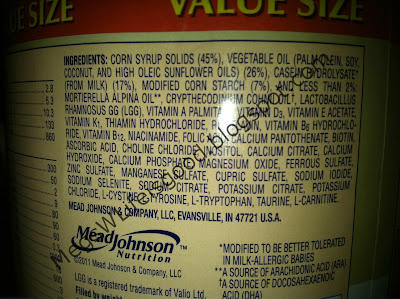 That is a picture taken straight from a can of baby formula in my pantry.  I have no idea why I still have this can.  Maybe it reminds me of how far we have come in just 4 short months.

Can you pronounce any of those words easily?  Do you know what many of those ingredients are?

They aren’t natural.  They are not God made and nature grown.

Ingredients on a package are in order of amount found in that product.  Corn syrup solids are the majority of what is makes up most general baby formulas.

I can’t even call it a food, because it isn’t.

Corn syrup or some form of it is found in almost anything in a package or box.  It is much healthier to find a real food recipe version of your favorite boxed foods and cook them at home.

Check out this link from Dr. Mark Hyman on 5 Reasons Why High Fructose Corn Syrup Will Kill You.

None of those ingredients aid in the health of the gut, body, or absorption of nutrients.  Do babies everywhere survive on that can?  Yes, they do. Do they possibly have unforeseen health complications later in life?  Yes.

Many of those ingredients have been linked to health problems, especially the highly processed High Fructose Corn Syrup, and vegetable oils in that can.  *ick*  I seriously can’t imagine making meals out of that stuff.

So, I did research.  I read.  I bought Nourishing Traditions Cookbook.  FYI- that is a link to the cookbook on Amazon.

I love it so much I took it to Kinkos and had the covers laminated, and the binding spiral bound so I can lay it flat and it makes it easier to flip through 700 pages. 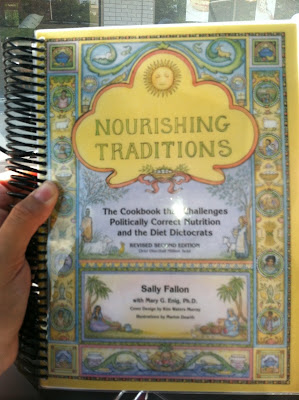 In the Nourishing Traditions cookbook, there are recipes for baby formula (it is also found on Weston A Price website).  One uses raw milk or goats milk, which with a dairy protein allergy Max cannot have. *for baby #4 in 2016, I did make the goat milk formula for our baby and it worked well. We will do it again for Baby #5 if necessary

The other uses liver and bone broth.  *ding ding ding*

So, I went back to searching for organic grassfed beef bones for stock and liver, and all the ingredients I needed for the formula.  After I found them all, we decided to dive in and do it!

I began weaning him onto the meat-based formula the week we left for a trip in June.  I made up a few batches, froze them, and took them with us.  By the time we got home he was on the homemade formula full time, in addition to his solids.

A few chiropractor visits later, and Max is no longer on medication.  His gut is healed- thanks to that bone broth and it’s mineral producing gelatin, no doubt.  The chiropractor also did work on his gut, you can read about that here.  (Google the importance on bone broth in your diet). **This was all pre-the big bone broth craze of paleo and keto fads. But doesn’t change the fact that it is affective.

Gosh, it really brings me to tears writing this out.

His belly is healed.  He occasionally spits up, but usually only when I get his bottle too warm, or he gulps it down.

Oddly, after I started Max on the homemade formula, he became a new baby in many ways.  He started napping better, was generally happier, and his development shot off.

He no longer has reflux, and there aren’t acid reflux stains on his bed sheets anymore.  Even on his medicines there were smelly, acidic stains on his sheets after a nap, or first thing in the morning, from refulx.

Not a medicine that masks symptoms.

So, what is this homemade, meat-based baby formula recipe, you may be asking?
From Nourishing Traditions by Sally Fallon, page 603 here it is:

Now, assume all those ingredients are from only the best sources and are organic.  Because anything you can get from Walmart probably isn’t the best quality ingredient. **In 2019, you can actually find a lot of organic foods and ingredients in Walmart and Kroger- yay!

I found mine at: http://www.radiantlifecatalog.com/ and I get my coconut oil from http://www.tropicaltraditions.com/

I use Weston A Price Foundation as a HUGE source of information and health related articles, along with Nourishing Traditions– it is so much more than a cookbook!  It is over 700 pages of wisdom, science, and traditional health information.

The point of this recipe is that all ingredients are natural, whole, raw sources of the vitamins, minerals, and nutrients a baby needs-they can be easily absorbed and the body knows what to do with them.  They are not processed or found in a man made vitamin capsule.  (you can overdose on synthetic vitamins, but it is much harder to do so with natural sources because your body knows how to use them and rid of excess.)

I also want to include the breakdown of the nutritional analysis done by Sally Fallon and Weston A Price Foundation of breastmilk and these homemade formulas.  Obviously breast milk is BEST, provided the mother eats a nutritious diet, but some of us aren’t able to nurse or continue nursing.

This is a good alternative for my family:

Based on 36 ounces.
These nutrient comparison tables were derived from standard food nutrient tables and do not take into account the wide variation in nutrient levels that can occur in both human and animal milk, depending on diet and environment.
* Vitamin A levels in human milk will depend on the diet of the mother. Nursing mothers eating vitamin A-rich foods such as cod liver oil will have much higher levels of vitamin A in their milk. Commercial formulas contain about 2400 IU vitamin A per 800 calories.
** Calcium and sodium values for homemade broth are not available.
*** Vitamin E values are derived from commercial vegetable oils. The vitamin E levels for homemade formulaswill be higher if good quality, expeller-expressed oils are used.

At first I was embarrassed and scared to tell people I made Mister’s formula. As in most things, when you go against the grain or do something differently that mainstream society, people think you’re a little wacky. In 2019, it can be easier for people to see the benefits of real, nutritious food for all stages of life, than it was even in 2013.

I am proud to say we worked hard, and we healed Max’s gut (and therefore damage caused by the commercial formulas and medicines we had tried).  He is healthy, growing, and gaining weight better than he ever did the first half of his first  year.

We are approaching his first birthday, and I am so thankful.