Well, a lot has happened…
Lexie is officially 22 pounds; I am not sure how long but she is VERY tall.  She has started pulling up in her crib. Funny story-I was talking with another mom whose baby is 6 weeks older than Lexie; we were talking about how they aren’t crawling or pulling up yet (although her son can crawl every direction except forwards, while Lexie is far from that).  Then we got home from camping with them, and I put Lexie in her crib while I took the sheets off and did some laundry; J.Tom and I were going to drop the mattress that afternoon because we figured she would be pulling up before long, and her head is higher than the crib when she sits..  I turned around from doing laundry an she was bouncing.. like this: 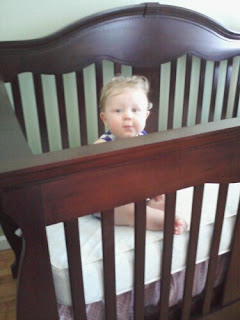 Then, she grabs hold of the railing and bounces.  Suddenly, she pulls up, like this: 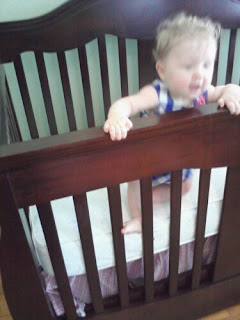 And then, she is up!  And SO very proud of herself!! 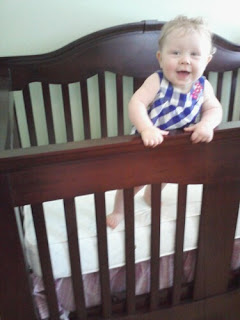 So, that was one adventure this weekend.  Then after this I started holding her hands while we played on the floor and she will take a few steps.  She even pulled up on the couch while sitting on my knee (she cannot reach from the floor).  So, it looks like she is probably not going to crawl much, if at all.  I always figured she would be an early walker..  She will even use her stomach, while standing, to keep from falling-like if I have her hands, and she starts to waver, she will push her tummy up to keep from falling.  I don’t think it will be too long…
Anyways, what else… She is becoming more clingy to me.  I am not sure what is up with that, except that she has definitely started recognizing strangers.  OH-EM-GEE.  Last Wednesday she looked at J.Tom and said “Da da.”  Not “da da da da” like she was babbling, NO- “da da.”  Grr..  she hasn’t done it since, but when I ask her where Daddy is, she looks around for him… so she knows.  He practices “mama” with her now, because I think he feels bad  =)
We went on our very first camping trip as a family.  It was… interesting.  We had a BLAST.  Sleep time was a little difficult for me.  On the way up there, she got a 4th nap, so she was up until after 9:00 Friday night.  Then Saturday night we stayed at a friend’s cabin until late, managed to keep her asleep on the way to our camper, but then she woke up as I put her on her bed!  Then I couldn’t get her back asleep good, but J.Tom managed to after about 10 minutes.  Sometimes I think that must have to do with me nursing her; she just won’t go to sleep well for me sometimes, but then J.Tom can take her and in a few minutes, she is totally out!

Saturday I took her on several walks; we even ran into one of my brother’s friends there-WEIRD! Honestly, I recognized his son before I could think of his name.. but anyways so, it’s a small world.  J.Tom went fishing Saturday morning and Lexie and I walked down to the lake and enjoyed the morning.  That afternoon, some friends from his work came up and stayed the afternoon.  They brought their two puppies, both of which are BEYOND precious.  Then some friends from LR came down and got a cabin; they brought their little boy who is almost 9 months old.  Sunday morning we got up, I got things together and played with Lou while J.Tom fished.  Then we met our LR friends at the Cedar Falls Overlook-FUN FUN!  Here are some pictures from our weekend:

So, that was our weekend in a nutshell.  18 DAYS UNTIL I AM HOME WITH MY LOVIE LOU!  I cannot wait.  I am putting in applications at all the surrounding schools, we will see if I get any interviews.  I am hoping to get a job, complete my Praxis III, and get my official license.  I REALLY want to teach Kindergarten!  I just loved those babies, they are so very precious.  I think Kindergarten was much more exhausting than third grade, but I really enjoyed it more.  I will take any job though, you can always change grades later.  So, just be praying I find a job by fall.