He is just so dang sweet. 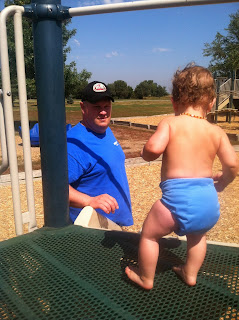 And he loves me, and wants me for comfort, etc.

But he is obsessed with 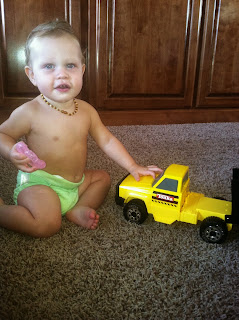 Right now, his favorite “hand” toy is his Kevin the Crane Train

, my dad got him for his birthday.  He loves that thing and carries it around most of the day.

If he doesn’t have the crane train, he has his lovie.  Oh my.  It goes everywhere!  It’s pretty cute. And if he isn’t holding it right that minute, it better be close by, or he walks around aimlessly until he finds it.  Then resumes his previous activity.

He still loves Scarlet, very much.  They “bond” through the screen door.  haha  “dag dag dag”- which is dog dog dog.  And sometimes it comes out “da da da,” and we only know he isn’t talking about his daddy, because he isn’t growling it (and he is looking at Scarlet…).  haha

His favorite foods are peanut butter, banana (NANA!!!), any fruit really, chilli with rice, eggs, oatmeal, and anything we are eating that he can have.

He is now on the coconut milk tonic from Eat Fat, Lose Fat

.  It has the equivalent calories to cow’s milk, and he loves it.  He still takes it from a bottle.  He took it from a sippy once, and then refused it for an entire day after that… I am not really concerned about the bottle, because he only takes it a few times a day, and we will break it eventually.

He LOVES his kombucha out of his sippy though.  Give him some “bucha bucha” in his sippy and he walks around like he owns the place.  So I am sure he will accept the milk in it soon.  No rush here though.

We are still a no go on the cow’s milk- it makes his throw up all day, and scream when laying down.  And that was only a spoon of dairy.  Hopefully he will outgrow this by 2?

Goodnight Moon is his favorite book… we read that at bedtime along with a few other favorites.  He is doing the motions to twinkle twinkle little star.

OH!  This was so cool- we were in church last Sunday, and he pointed at the star in his book, and said “sta!”  I was so proud!  =)  He has only done it once since then.  He can point to it if you ask, he just sorta refuses to say it.  Polar opposite of his big sister…

Mister is obsessed with my watch, which we call a clock, overhead lights, and dumping things.

If he can put something inside something else- he is a happy little camper!  The other day he just took his whole puzzle over to the trash can and dumped it in!  That was fun cleaning up ..
When Lexie and I are playing with something in the floor, he immediately starts tearing it apart and putting it into its respective container/tote/box (blocks, animals, balls, etc).  haha 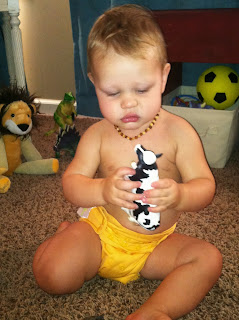 I know, the boy is never in clothes.  Well, he has been lately because of the cooler temps.  But have I told you what a sucker I am for sweet baby fat rolls in cloth diapers?!  *Guilty* 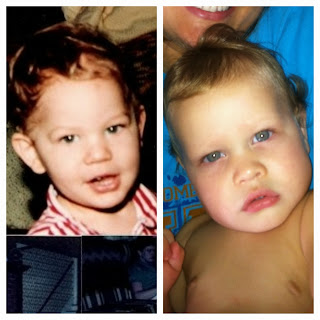 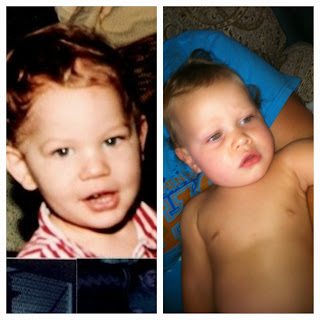 But then, there are days he looks like my baby pictures: 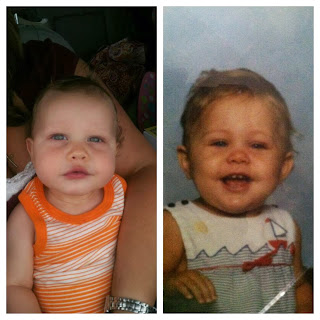 Anyway, that was just for fun.  I think Jeremy would be proud that Mister looks like him.

He weighs in at 23.8 pounds (we FINALLY got a scale in the house) and I am not sure on height.  Thi is good considering the rough start he had with formula and milk, reflux,and poor weight gain for the first 6-8 months of this life.  But he is on track now!

Sleep is still two naps, and 12-13hours at night.  We tried moving the first nap back, like I mentioned in my last update.  But that totally backfired with shorter naps and earlier morning wake times.  So we are still at a 2 hour wake time before first nap, 3 hours before second nap, and 4 hours before bed (usually 6:30-7pm).  It is working, knock on wood.

We are coming into wonder week 56, but he always starts them early by a week or two, so I think that is what this last disruption has actually been.  I figure by the end of it he will either naturally push that nap back, or completely drop a nap on his own.  Max has always consolidated his sleep on his own- I attribute that to him never having been in daycare where they determine his sleep, and thus disrupt it.

We have been able to naturally work with his sleep needs and it fits in great with our family routines, so it works for us!  Clothes are 18 months, I figure we will be completely in 18-24 and 24 after Christmas.

He was in a 4 shoe this summer, and he is wearing a 4.5 wide stride rite walker now.  This boy has the flattest, fattest little feet ever.  haha  They’re so cute!  Lexie had really wide feet but super high arches.  Mister’s little feet are so flat.

And I guess that’s it.  Still putting everything in his mouth.  Everything.  Enjoys playing “what can I dunk in the toilet today?!”  Poor Lexie does a really good job at keeping her toilet lid down in her bathroom, but sometimes …. and I think Max just had a radar that tells him the lid is up.  haha

OK, I think that is about it for our 12 month summary.  He is just a super sweet little mister!