Wow, where do I begin?  It has been so long I do not remember where we left off.   I was supposed to go to Memphis for my great grandmother’s birthday last weekend, but SOMEONE had a stomach bug..  Poor Baby Lexie.  First it was violent vomiting, then throwing up and runny diapers, and then just runny diapers and some throwing up.  But in a matter of 2 days she lost a little over half a pound, so it was pretty icky stuff.  However, WE HAVE TWO TEETH!!


The first one cut Monday morning, I think, and then second one cut yesterday!  Such a big girl.  =)  Poor baby, it was not fun for her.  I thought maybe it was the teething causing the tummy stuff, and I guess it could have been, but the doctor said probably not since it was every single time she ate and everything she had eaten.  But never fear, she has gained her weight back I’m sure and feels better.  She has a little cough, which is probably because I am sick again, but we are hoping it is nothing that sticks around this time.


Tonight was the first time someone else gave her dinner and got her to sleep other than me.  =(  Of course she was fine, but that is still our special time, since that is really the only part of the day I get to spend with her.  When she gets home from school it is nap time and then we only have a little while before dinner to play and stuff..  So I missed that tonight.  J.Tom and I went to dinner at another couple’s home.  They are expecting soon (May I think) and they are really funny.  So, we had fun.


This weekend we will start running in our jogger.  I have not yet ran with her in it, although we have done much walking.  We begin the Women Can Run clinic Monday!  Woo Hoo!  This is my third year, and I am so excited.  Last year I dropped out mid-pregnancy, but I am so ready to get back to it and get this weight off my hips and butt.  I am down 6 pounds so far, but that is not much when you look at how far I still have to go.  But I know meeting with all my favorite ladies will help keep me motivated, not to mention the summer coming up.


She’s just the most precious baby ever and I still hate leaving her for school.  I love teaching and being with my students, but I will always love Lexie and our time together more.  I am trying to convince J.Tom that once we have 2 kids in daycare, paying 900+dollars a month in daycare costs won’t even be worth the rest I will be bringing home after mileage, etc.  But that is in the future, so no worries now.  However, I am so ready for another baby… but not ready.  I want to keep enjoying just the one for now.  You only have one once before you have that second one too, and that makes things harder, so I am just trying to soak in my time with Lexie first.  Layla or Lydia, Easton, and whatever our other children’s names will be, will just have to wait.  =)


Well, apparently she has just about mastered rolling from her back to her tummy… because I just checked on her in the crib (mostly asleep), and she was on her tummy with her arm caught under her. 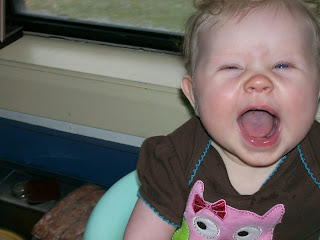