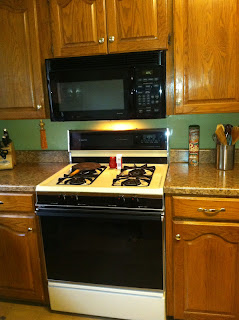 Wow- sorry it has been so long since I’ve posted.  We have been crazy busy to say the least.   We finally got new carpet in Max’s room.  And last weekend JTom started the counters.  We have one counter left- he has completed the other two.  Here is a quick pic.  No more terrible blue!  YAY  We still have to paint the cabinets one day, but I’m so excited about the counters I don’t really care when that happens.
We have officially hit the charted terrible two tantrums- Oh. My. Goodness.  The worst part is nap time.  She is so tired, and still needs a nap but refuses.  She cries, poopies in her diaper, screams … the whole nine yards.  When I lay her back down and try to pat her to get her relaxed, she kicks, rolls over, looks up at me. So I walk out.  Which of course makes her angry but Im not going to stand there while she acts a fool, refusing to nap.  (I’ve tried different nap times, different tactics, etc)  So she stays in her crib for 2 hours.  Sometimes she passes out at the very end, but usually she is still awake.  This just means she has an even earlier bed time, but it also means she is terribly cranky at 3:00pm and nearly passing out at dinner at 5:45pm.  The only thing that really bothers me about the lack of naps is that it creates this terrible over tired cycle and that creates a horribly cranky, tantrum throwing toddler.
But this too shall pass.  I’m taking it surprising well, because I know it’s a phase, and I know I can’t snap my fingers and she go to sleep.
However, there is a HUGE plus side to all this: she is potty trained!  We semi-started Monday with several accidents, but on Tuesday she only had 4 accidents and TTed in the potty 22 times!  haha  Yes I counted.  Then yesterday she had one accident when Daddy came home and she was trying to get out the door to him. Today she has had NONE!  She even stops playing in her pool to sit on her potty!  Not kidding.
You know, we have tried this a couple of times.  Well, every 4-6 weeks since January when she started telling me before she actually poopied or that she was wet.  And I really think each time a different part of the puzzle clicked for her.  In the last few weeks she has been begging to wear panties instead of diapers while at home- so we did, despite the accidents.  Then Monday it was like a different light came on and she just got it!  She gets so excited and we go run to get “special treat” which is a hand full of raisins.  (haha all this over raisins- who says you need to use something unhealthy as a bride reward incentive?!)
I am very proud of her; and i tell her that often.  She will say “Proud of you?!” with this little sheepish grin on her face- and I tell her “yes, VERY proud of you!”  She just lights up.  But back to the napping thing … since we started this she refuses to nap.  And I think it is just a developmental milestone- like when babies are learning to walk/talk/crawl/teething, how their sleep gets fubarred- because the whole time she talks about pottying, getting “down go play” etc.  But she is so tired and won’t settle herself down in the middle of the day anymore.
******ALERT*****  As I was writing that I went in to lay her back down- and holy cow if she didn’t let me pat her to sleep.  Can I get an Amen?  This very pregnant mama is about to go lay down, too.  I will finish updating this post later!  Gotta get my rest in when I can  =)
OK- after we spent the afternoon playing in the pool and soaking up some Vitamin D (with sunscreen on, of course) we are inside winding down.
Did I mention she napped?!  Whew- did I ask for an “Amen!?”  Because it was quite the relief.
Here are a few pictures for the last few weeks:
Be Sociable, Share!