After making Lou’s lovie, I tried making a hooded towel.  Oh my, how simple it was!  I did look up a tutorial for this project, because it wasn’t as simple as “piecing together,” it involved cutting things.  I’m not good with cutting things without instructions.  I should probably go back to Kindergarten …
So, I did look up a tutorial for the hooded bath towel and you can find it HERE.  It was SO easy! There is also another tutorial, that i actually like even better for the hood of the towel, HERE.  I don’t care much for the hand corners on her version, but I think making the hood might be easier, and look neater.  Of course, had I used bias tape or ribbon on my edges, it would have looked neater anyway.
Here is how it turned out: 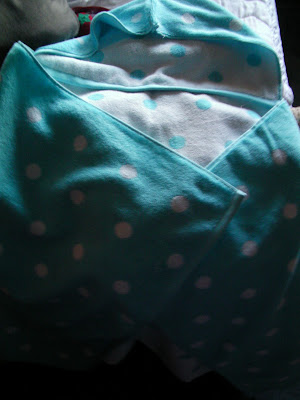 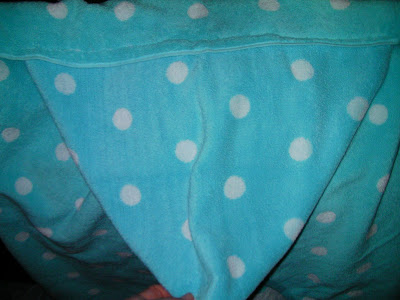 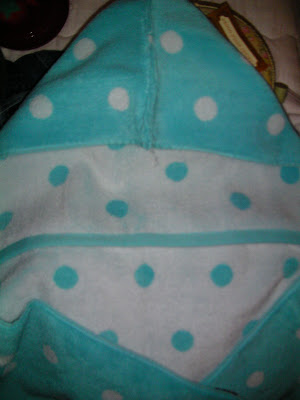 Clearly it isn’t pretty and my stitches aren’t quite straight- After talking with my very crafty sister in law tonight, there are a few things I would have done differently.  I would have been sure to use the finish side of the hand towel for the top of the hood, instead of the cut side.  I also would have sewn the two right sides together, instead of doing it one on top of the other (which is what was suggested on the tutorial, so I did it her way).  Mind you, it looks much better in person and clearly it is functional, but in being a perfectionist, I would have liked it to look a little nicer.  Also, if I had fat (2-3″) ribbon, I would have sewn that on the edge of the hood (hand towel) before attaching it to the body towel.
Again, if you know how to sew a simple stitch using your sewing machine, OR by hand, this is a super easy crafty activity and makes a wonderful gift!  The VERY best part of the whole thing is I got these very nice, large thick towels on clearance at Home Goods for under $8.00!  You can make two towels with one hand towel since it is cut in half, so wala- a nice baby gift under $20!
Enjoy!
-Meg