Mister has been sleeping until 6:00am most morning, when he isn’t comung unswaddled!  He has started breaking out of his swaddle about 2:00am, and wakes himself up between 3-5am.  His movements are not yet smooth enough to wean him from the swaddle, and he still has the startle reflex, which babies usually outgrow between 4-6 months.  So for now we are keeping the swaddle.


We have pretty much been gone from the house for two weeks.  We spent several days on a family road trip, came home for 2 days, then went to Memphis for a family Thanksgiving.  It was a great time, although too short, as always.  I have such a better time when JTom comes with me, I don’t get home sick as quickly; when it’s just me and the kids I am ready to go home within 2 days.  But unfortunately, JTom can’t be gone from work that long at a time.

Mister is either on a nursing strike or the reflux is hurting him, not sure which.  But he hasn’t been nursing that well.  He is taking about 5oz in a bottle, after nursing.  His reflux seems to have flared again, despite the prevacid.  So we are going to go back to the dr after the holdiays.  I called and she recommended thickening his bottles; problem is he doesn’t like them thickened.  He just plays with it and doesn’t eat.  So that’s definitely not good.  He is finally awake for longer periods of time.  He has rolled over a few times from his belly to back, but not much.  Like his sister, he gets angry while on his belly and usually just fusses.

Lexie’s 2 year molars seems to be most of the way in.  She loves school, gymnastics, and now she loves playing with her brother.  The first few weeks were a breeze, then after about 4 weeks she realized he was staying and she started acting out.  But now, it’s like she is over the acting out and jealousy
for the most part.  She wakes up from nap wanting to play with Max, she wants to snuggle with us together in the chair.  So, I think things are starting to smooth over, but I know there will still be rough days.

So, this is the 10 week update.  It’s not as in depth, since I have forgotten a lot of what went on.  But hopefully the 12 week I post in a few days will be more detailed.

I know, I’ve been slacking. I am running behind on Max’s updates.  Things have been very … crazy around here.  But crazy good!

For the last week, Mister has been waking at 4:00am in the morning!  Sometimes as early as 3:30am!  I knew this was a possibility, that he would go from sleeping so well, to waking early.  I also read that sometimes before babies start sleeping through to wake up time, they may teeter-totter going from 3:00am, to 4:30am, back to 3:00am, etc.  That’s exactly what Mister did for the last week.  Then suddenly, at 10 weeks old he slept through to 6:00am!  Woo Hoo! 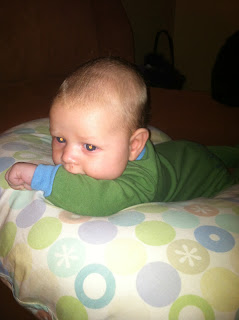 Now, the last two days he woke at about 4:00am or so, fussed for a minute, then went back to sleep before I even got to his room.  I think this also has to do with us starting some CIO. At first I let him cry during the day for anywhere from 10-20 minutes, depending on how he was crying.  And so far, things are going really well; he is only waking for about 3-6 minutes now, fussing and falling back asleep.  It’s amazing!  I’m not doing hard-core CIO; I didn’t do it until 8 months with Lexie, but i didn’t really have to until then.  With Max I need him going to sleep on his own sooner than she did, so that’s why I am trying it earlier.

Anyway, for his weeks 8-9 everything was pretty much the same as before.  Week 9 he started eating more at each feeding.  He will nurse and now takes about 4-5oz after nursing… So he is a hungry little Mister!  His schedule is the same, based on a 3 hour routine…  He is talking a LOT, super snuggly, laughs at mommy, daddy, and Lexie all the time.  He is staying awake for a little longer now.  His wake time is about an hour to an hour 20 minutes, depending on what we did during wake time.  If he was super stimulated (ehum, by Big Sister) then he may go down earlier.  His wake time includes: diaper change, eating, burping, playing, talking, diaper change, and swaddling/wind down for nap.  That’s a lot to fit into an hour and 20 minutes, so there isn’t much “playing” quite yet.  I am anxious for the day he is awake longer, but I know it will come.  I’m just ready for him to get to interact with all of us more.  =)

I’m making Mister’s summary shorter this time, because Sissy has MUCH bigger news going on these days than Bubby does!

Love Bug is back in school, two days a week.  We were getting read to put her in gymnastics when JTom remembered that we put aside a rather large chunk of his paycheck at the beginning of the year for mother’s day out.  Our plan was to have her home w me after I stopped cleaning houses, which was at 7 months pregnant, until max came.  After Max came we would do mother’s day out one-two days a week for Lexie’s sake and mine.  Well …. we FORGOT!  So, to use up the rest of the money (because it’s a cafeteria plan we will lose it if we dont use it) she is going 2xs a week through january.  Then she will drop to once a week.  However, we are still doing gymnastics- and she LOVES it!  We went last Friday to try it out.  She was already a beginner tumbler, she’s had so much practice in her crib and all … so she fit right in! 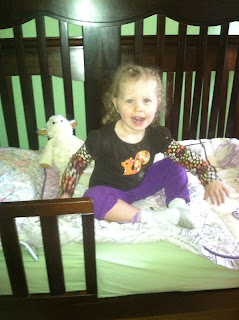 Speaking of cribs … we are in a big girl bed now!  Scary I know- but so far so good.  She loves it, the transition was an easy one.  She is still in her sleep sack, not sure when we will discontinue it, but she can’t get out and roam as long as she wears it.  =)  Plus, she loves her “night night gown” … i think she feels secure in it. 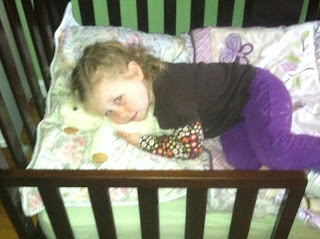 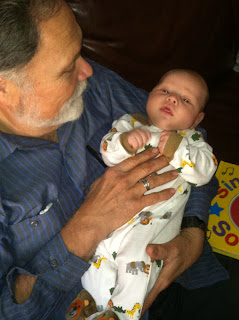 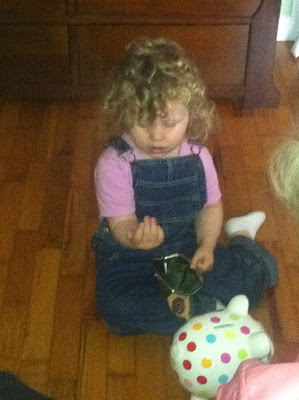