Lexie is definitely coming into her own.  She has a strong personality anyway (cannot imagine where she gets that from ..) but she is getting more and more hilarious as the days go by.  As I have mentioned before, she picks up on every little thing we say and do.  As I am changing her diaper I usually give her a toy because she is so wiggly these days; apparently she has picked up on me saying “I am trying to wipe your booty, hold still!”.  Because NOW she says “booty” every time we go to the changing table.  It’s really quite hilarious.  She also knows when I say “I need to check your diaper” to come see me, and tots right over.


Lexie knows most of her important body parts; eye, nose, mouth, belly, feet, toes  ….. and booty!  =)
She is signing more and more; literally, she signs “more” now.   She did this for a while a few months back, and then we both got out of the habit of using it.  Mainly she uses “please” A LOT!  It is just too precious when she is pulling on my leg, and I  look down to find her signing “please” to be picked up!  HOW CAN YOU DENY THAT?!  It’s so sweet.


Next, I am going to work on “help” and “thank you.”  She will say “thank you” after I do, but she does not do it on her own.  However, I am not sure how to enforce the use of “thank you.”  With “please” I just withheld whatever it was until she copied my sign, and now she does it all on her own.  I can ask her “what do you say?” and she will sign “please” and SOMETIMES (but rarely) say it, too.  But thank you may be a different story since that is something you say after you receive something.  So I don’t know.  I used to sign “eat” a lot, and haven’t done it in a while; one of her Baby Einsteins is a signing DVD.  She has learned to sign “eat” from watching it!  It can’t be from me, because I haven’t used it in a few months, I’m sure.  She is just a genius.  😉


Her daddy has taught her to say “clock” and she is obsessed with pointing to it and the fan.  Sometimes the fan is “fan” and sometimes it is “clock.”  She says “juice,” although her juice is about 1oz juice and 6 oz water, and milk is still “gack.”


Her misbehaviors are pretty much pinpointed to pulling up her play mat, now.  I wouldn’t mind her doing it so much, except she eats them.  Apparently she is never going to get out of the “oral” stage, because everything still goes in her mouth before she tried to figure it out.  It is like an octopus using it’s tentacles to feel something out before it uses it; that’s what Lexie does with her mouth!  haha  No, really though I guess it is the teething, now everything goes to the side/back of her mouth, so it must be those new teeth.  Ick. 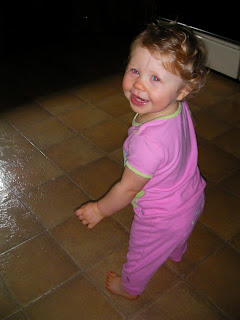 Anyways, back to her behavior.  When she does that I will try to distract her, then say her name once, and then tell her she will get time out. … (that’s technically 3 warnings). Time out for a one year old.  I mean, she gets it.  She knows when she goes in her pack n play with no toys and I say “time out” it is because she has done something she shouldn’t have because when she gets out (after one minute) she usually doesn’t try it again.  But I am not sure if that’s the right way to handle it.  squeezing her hand doesn’t work anymore, and popping her “booty” doesn’t work most of the time.  Unless JTom does it.  Then her feelings are really hurt and she will stop. It is rare that it comes to that.  Most days we have no problems at all.  She is just learning and pushing her boundaries, which is normal.  I’m thankful she is such a sweet, smart baby girl!
——
Her teachers LOVE her.  They always have a funny story about something she has done that day.  Last time it was using baby doll clothes to wipe her feet off (Hrm, wonder where she gets that?)  She also does this thing where she props herself up in the highchair at home and kicks her foot up against the try while she drinks her milk.  Evidently she has started to do that at school.  Only at school, they sit in real-life chairs attached to the table and her legs gets stuck.  So they have to un-attach the whole chair and pull her leg out when it is time to get up.  Haha  She is a mess..


And, the last big announcement: it is FALL!  Woo hoo!!  How exciting.  I  love this time of year; I really want to decorate, but that will have to wait a little while.  I am trying to decide what Lexie will be for Halloween.  We have done the bumble bee; a friend suggested a butterfly or the hungry caterpillar.  That is a possibility, but I don’t know if that will just be too much of the whole Hungry Caterpillar thing.. but it’s cute!  So, I don’t know.  Any suggestions are welcome!