We are still doing the Zantac, while waiting on the Colicalm to get here. I think it will be here Monday.. fingers crossed!  Anyway, he’s still on Zantac, and sleeping great at night!  Sometimes 10-11 hours.  He is on a 3 hour schedule, with cluster feeding in the late afternoon.

Eating
Max is nursing about 20 minutes at each feeding, then takes 2-4 ounces in a bottle.  Sometimes it’s breastmilk, sometimes formula.  I tried some rice to see if it helps keeping the reflux down, so far I don’t think it is really doing anything?  I know it has thickened his poopy diapers and he isn’t pooping as often.  So today I’m not doing any rice, and we will see how it goes.  I was afraid it would mess up his system, and it looks like it may  =/  Not sure though.  But he seems to be doing fine without it, so I may just stop it all together.  I will see how this afternoon goes.

Sleeping
Night time is great right now.  His last feed is at 7, he is usually asleep by 8:00, and sleeps until sometime between 4:30am-6:00am most mornings.  I am really hoping this doesn’t change and he goes back to MOTN (middle of the night) wakings, but we will just see.  I swaddle him for every sleep-time, which he seems to enjoy.  Once I swaddle him, and sing a little of Jesus Loves Me, he relaxes and gets ready for sleep.

Day time sleep is a bit different …  Like many babies, Mister wakes about 20 minutes into his naps.  This is either because A) he is over tired when I put him down, or B) he is going from light to deep sleep, and is waking up during the transition.  Since i have tried an earlier put

down time, and he still wakes, I have moved on to option B, he doesn’t know how to transition during sleep phases yet.  So, I am letting him cry for a bit.  However, he gets more worked up if I try to let him CIO (cry it out) so I usually give him 3-5 minutes, then go intervene somehow.  Sometimes this is sshing him back to sleep, patting, or moving him to the swing.  Babywise says if CIO isn’t working yet, to try something else until he is a bit older and then try CIO again.  Hopefully by moving him to the swing, it will help him make a smoother transition over time, and he will evcentually sleep right through the light to deep sleep phase.

I am currently putting him down while drowsy, but not completely asleep.  Sometimes he goes right to sleep, sometimes it takes a bit more to get him asleep.  But overall he is doing good sleep-wise.  =)

Lexie
And we have 2 year molars!  Yay!  Yesterday I tried an earlier nap time and it worked!  I put her down at 12, she was asleep by 12:15 and slept for an hour and a half.  Today I did the same thing and she is in there playing … I guess it’s hit or miss, but no matter what I am sticking with
the earlier nap time.  it seems to be the only time she falls asleep on her own.  Between the potty training, the natural sleep regression at 2, and the teething, it’s really a lost cause.  But I am deteremined to keep trying.  Because at some point she will be potty trained completely, past the sleep regression, and done with the molars, and we will need a consistent routine.  I also need my sanity which means 2 hours of Lexie in her crib for nap, rest, whatever you want to call it.  But man, yesterday after her nap she was the sweetest, happiest Lexie; she was her normal Lexie self!  Not the sleep deprived, demanding, whiny “terrible twos” Lexie she

becomes on days without a nap!


Life in general is good.  Last weekend we took the kids to the sate fair.  Lexie LOVED all the animals; they even had a live animal show with a Bamboo, dog, and parrot.  She of course really enjoyed that.  Max did good on our little family outing (of course he was chilling in the double wide the whole time so he was a happy boy).  JTom’s back may be going out on him again; he’s going to see the doctor hopefully this week if he can get in.  I am getting lots of night sleep, and rest during the day most days.  I’d say 4 out of 7 days I get an hour of down time; even if that is me nursing Max while Lexie naps- I consider that down time!  =) 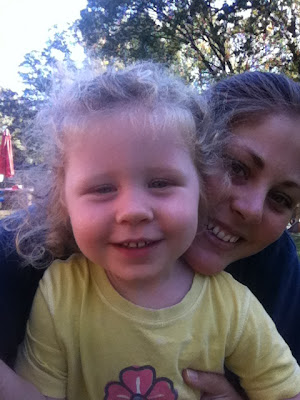 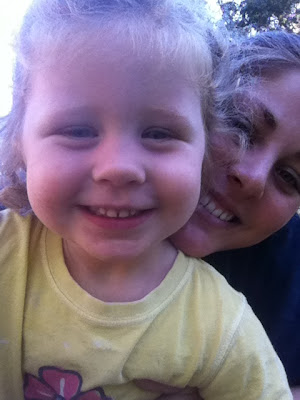 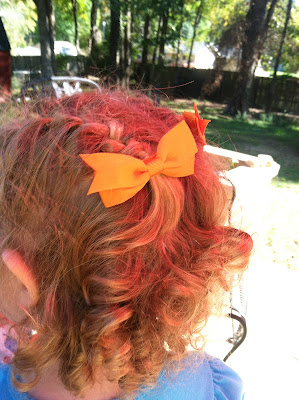 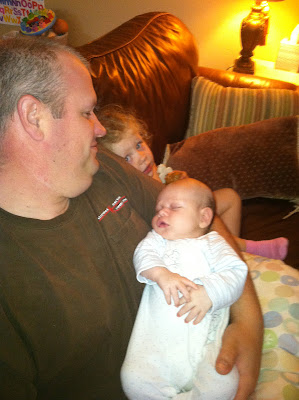