Well, it’s been a while huh? So … we have moved!  We successfully moved our children, the animals, and our belongings a month ago.  Whew, it was a little crazy, but we did it!

First I will do a quick update on Max and Lexie, then an update on everything else.  Max has outgrown most of his 6 month clothes and is sitting for long stretches of time now.  He still likes his feet, and loves his Lexie.  We have been signing for “milk” for a month or two now, and he has started to do it back while eating or waiting for me to finish making a bottle.  I am not sure if he has put the meaning of it to the actual result, but he signs back at me.  So he is either good at imitating and will get the meaning soon, or he already gets it.  He has been less than a good sleeper since we moved.
For the first 3-4 weeks his room was too bright while we waited on blinds to arrive.  He was also getting used to his new surroundings, which I think was very distracting for him.  He has started having good naps about every other
day.  I’ve noticed when I get him up he smells SO BADLY of acid, and his sheets have been stained, so I do believe we are dealing with reflux again.  This could be due to many things: A)not taking his medicine.  We were doing probiotics and no dairy which were both helping.  But at this age reflux tends to flare back up, and teething can make it worse. B) his baby food could be contaminated with dairy.  Did you know food companies are not required to put ingredients on their products if it is cross contaminated, and not an actual ingredient?  So it is possible his baby foods are coming in contact w milk.  Also, I don’t have the carton to his oatmeal, but it’s possible it contains whey.  We are going to the grocery store today so I am going to double check.  We go to the dr tomorrow afternoon.

As for Lexie, since we cut back on milk, yogurt, etc. her eczema doesn’t seem to flare as much on her face.  I  just want to know for sure that Max has a dairy allergy, and what is causing Lexie’s eczema.  I had some of his Prevacid left over so we started it again… with our new insurance we have to pay for all of it, and here it will cost us …. wait for it ….. $224.31.  for a 31 day supply.  When the insurance lady told me this I cried all morning.  How is it possible these medicine companies can sell pain meds for $10-$15 a bottle (which many people turn around and sell on the street for $5+ a pill) and my son’s medicine, which he needs in order to EAT costs more than a car note?  I don’t understand how this is possible?!  And they don’t make a generic for the SoluTabs he has been prescribed.  So at the dr tomorrow we will be asking what else we can do, if the dr. feels it is the reflux flaring up again.

So, because of the possible reflux flare up, the move, teething, etc. Max has just not been taking good naps. On good days he will take 1.5hr naps.  On bad days, he sleeps for 20-40 minutes at a time.  It’s exhausting for everyone, because it effects everyone.  But like I said, about every other day is a good day for him.  Then we try to replicate it the next, and it’s awful.  I really have no idea what is going on.  Hopefully it will smooth out in the next few weeks.

Lexie loves her new gymnastics.  It is much different than the gym we went to in AR.  Her tot class is in the evenings, and there is a lot happening in the gym at that time.  It is really overwhelming for her, and it takes her about 10 minutes to become cooperative and pay attention to what we are doing.  She has always been this way; at MDO she stood back and watched the other kids until she was comfortable a few weeks into it. The same went for playing at the Y while I worked out.  And also at our play dates.  Now instead of quietly standing back and watching, she just wants to go do something else, and won’t pay attention.  I think this just comes along with her age, and being overwhelmed.  After a few weeks I think she will be more comfortable.  She has learned a lot of new, more advanced things, and has also shown the teacher a lot of things she could already do.

She LOVES her new house- her favorite room is the basement.  I have set up a little area down there for us to play and learn.  It is also plenty big for us to “practice” her gymnastics in the mornings when we can’t go outside.  =)  Gotta get some of the wiggles out.  She is obsessed with Thomas and Friends (although she has’t watched TV since our first week here-more on that in a minute), and to definitely not help out with that situation, a train runs through the corn field on the other side of the house.  They all have names from Thomas-Gordon, Charlie, Rose, Emily, etc.  All names are the same as her imaginary friends that showed up after Christmas… and are still around.  Nap times are now spent talking to them, instead of not napping.  But I’ve convinced her to tell them she needs to sleep, so they need to sleep.  She tells them no talking, but that lasts all of 15-20 minutes.  (hey- I think that’s pretty good for a two year old!)

We have been doing a lot of fun activities; it is a lot easier now that I have a place to keep all our materials and things.  I am going to do several separate posts on those.

Here are a few pictures from the last few weeks around the house: 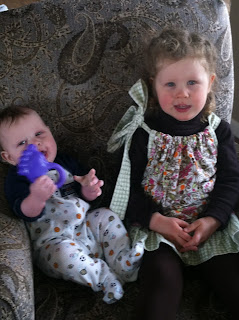 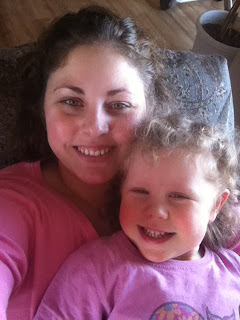 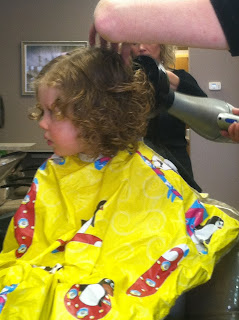